New staff member Paul attended the first Newark Monopoly Championship on 8 March as part of a table with local architects Studio G (SGA), a co-sponsor of the event.

The championship, hosted by Gusto Homes of Newark along with the Liz Hobbs Group, Duncan and Toplis, Andrew and Co LLP and Lace Law was the first of its kind in this district, a format adopted from a long running event in Lincoln.

The event was in support of local charity, Beaumond House Hospice who are a ‘Community Hospice based in Newark, providing care for patients with life limiting or terminal illnesses and support to their families at no cost to them’. 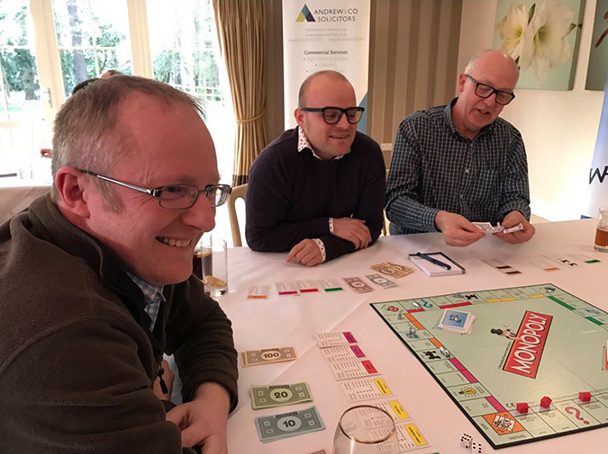 Held at the Kelham House Country Manor Hotel, five sponsored tables of up to six players battled it out in a shortened, one and a half hour game of Monopoly with the winner of each table playing a deciding game to be crowned the first champion.

‘After a very competitive two-hour final, the winning Monopoly trophy, which was hand-crafted by Collingham’s Men in Sheds group, was lifted by Cameron Ford of Reflect Recruitment Group’ (Steff Wright).

Influence want to extend their thanks to Gusto and the other sponsors, especially to SGA for the invite to form part of their table. Unfortunately Paul didn’t progress to the final but he did enjoy his first networking event in Influence colours and hopes to build on the warm welcome he received.